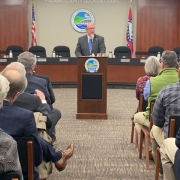 Strong, emboldened and concise could be used to describe Judge Barry Hyde’s annual State of the County address.

In his 20-minute speech, Judge Hyde laid out several areas of improvement including plans to restructure the county’s juvenile justice probation and intake process. He intends to hire a Director of Juvenile Justice Services who will draft a policy and procedure manual, clarify roles and responsibilities, develop a management structure and develop a training curriculum. These probation and intake improvements will be carried out in collaboration with the County Attorney and the County Judge. All improvements are based on recommendations from the Robert K. Kennedy National Resource Center for Juvenile Justice’s 2016 Probation System Review Final Report.

Additionally, Judge Hyde, in partnership with the Army Corps of Engineers and the Pulaski County Sheriff’s Office, will make improvements to Terry Park to make the park more welcoming to patrons.

Despite continued cuts to grant funding, the county will use carry over funds to expand out of school and afterschool program in Higgins, Oak Grove and McAlmont.

“If the state and federal government want to reduce funds for our out-of-school care and Pre-K programs, which provide assistance to lower-income families, Pulaski County has to find a way to do it,” said Hyde. “Ignoring their needs, robbing them of opportunity and reducing services to these children is simply not an option.”